You will find ‘historic’ radios in the Schatzalp rooms, and there is a story behind them too! 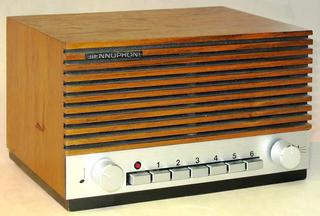 More than 50 years ago, Hotel Schatzalp wanted to enable its guests to get radio programs in their rooms. At the time, however, operating a radio was not easy, and tuning into stations in mountainous regions was a matter of luck. In 1931, however, the telephone claim was introduced in Switzerland. This made it possible to receive six channels of acceptable quality over the telephone line.

The suitable for telephone radio devices were quite simple and easy to use:

Three ‘generations’ of these devices are still in use at Schatzalp. The oldest still run with radio tubes, the others with transistors. Our showpiece is the device Biennophone Minitel 43 NB pictured above, which was introduced by the Swiss PTT in 1981 for the 50th anniversary of the telephone round-table. In the meantime it is one of the classics and is mentioned in articles about the history of the radio.

(Link to the folio supplement of the NZZ)

Unfortunately, in the year 1998 the telephone claim was discontinued with the introduction of ISDN, as the harmonics of the ISDN disturbed the signals of the telephone rounding. We would have had to replace all devices with new FM radios. Fortunately, we found a company that made us a device that transformed the FM signals of six transmitters into the conventional telegraph signal. This allows the historical devices to continue to be used today.

From the end of 2008, the digital radio DAB will be introduced in Switzerland, which will eventually replace FM. So we are again challenged: The goal is to be able to continue operating our historic radios in the ‘DAB and Internet age’.