In the course of time. Schatzalp was opened in 1900, and patients paid a fortune for a place. At that time, the most modern luxury in art nouveau style. Thomas Mann described the life in the sanatorium in his novel “The Magic Mountain”.

The guided tours will take place from 15th June to 19 October 2021 every Tuesday and Thursday at 2.15 pm. Meeting point at the hotel reception. Registration necessary. The guided tour costs CHF 5 per person.

Currently the number of participants is limited to a maximum of 25 persons, masks mandatory!

On the terrace, long and nice,
Waits a cushioned lounge chair.
Stretch out to your full lenght there.
Trust its healing power while
You relish the beauty of nature!
We call this delight the “Rest Cure”.

Our modern Art Nouveau Hotel was built – 1898 to 1900 – according to the best practice of those days, by the Zürich Architects Otto Pfleghard and Max Haefeli and opened on the 21st December 1900. The Schatzalp was created as a deluxe Sanatorium and was the most advanced of its type in the Region.

The great Initiator and Founder of the Schatzalp Sanatorium was Willem Jan Holsboer, a Dutch Entrepreneur, who searched for a considerable amount of time to find a suitable place to realise his dream. Time and time again his walks led him to the Schatzalp, which in those days could only be accessed on foot. Holsboer sensed through his strong intuition that this area of land was very special; although he could not prove this in scientific terms, he felt that the Schatzalp radiated an extraordinarily positive energy. Some years after the construction of the Sanatorium, this „intuition“ was scientifically proven. Thanks to the methodology of Alfred Bovis, a scientist who invented the Bovis-Biometer, Bovis Energy Units could be measured. Anything below 6’500 Bovis units drains energy from a person, and anything above is energy-giving. Interestingly, there are places here on the Schatzalp that measure 26’000 Bovis units. The Sanatorium was one of the first reinforced steal-concrete buildings in Graubünden, and was innovative not only in costruction, but in modern features, such as its flat roof, floor heating, exceptional sanitary standards and other high- tech installations.

Willem Jan Holsboer, was a experienced and ambitous entrepreneur with a determined and risk-taking character. „If you want to build a sanatorium at 1900 meters above sea level, you have to set existing architectural conventions aside and think about how the building can be protected from the elements (wind and snow) At the same time, the interior should be simple and of the best standard.“ he said and continued: „Simplicity and elegance can be difficult to combine. One must bring one’s own experience to this project, and so it is preferable to work with young people, people who are open to discussion.“

Progress was seen in that, instead of simply dismissing hitherto existing styles, rather various styles could be fused not alienated. They wanted to achieve something never seen before and instead of building an aristocratic palace they started to take regional architectural motifs and converted them with new building methods. The small entrance to the Sanatorium Schatzalp was unusual and modern: great halls and wide staircases might have been expected at the time, but here you found yourself in a high entrance which appeared more like a cloister. Facing the entrance you could see a sign of technical progress, a wooden elevator. The style of the Schatzalp, and the whole Sanatorium was a remarkable and shining example of modern architecture of the 20th century.

The different styles and elements stemmed from the English “Arts and Crafts” movement, these were implemented and therefore the construction was no longer bound to the ground plans of a building, but to functionality, with proper size and proportion in every single room. Interestingly and uniquely the Schatzalp still has the same appearance that it had around 1900 and there was no reconstruction or improper renovation at any point, therefore the building has been able to retain its soul and the imprint of a Sanatorium. “An old diamond got a new grinding”; this description from Oscar Miller reflects the consistent objective of the Schatzalp to effect appropriate renovations.

The Sanatorium which stands on an artificially constructed sun plateau, (which was designated after two years search to find this particular place), was fitted out according to the highest standards for hygiene and comfort. No detail was missed. And so it was that the bath tubs in the luxury rooms were decorated with lion’s feet and even had heated rims; the flower painted toilet bowls from England even boasted toilet seats which could be heated with hot water. The food-elevators connected the main kitchen with all 3 floors of the building and were equipped with plate-warmers so fresh, hot food could be served to bed-ridden patients. The rooms were constructed with a couple of steps leading up to the spacious balconies; this difference in height made and still makes it possible to enjoy 2 more hours of sunlight on the balcony.

Since 1953-54 the Sanatorium Schatzalp has been run as the Hotel Schatzalp. Indeed we have long standing guests who return year after year to spend their holidays here and and in some cases always request the same room!

As already mentioned, the soul and the architecture of this building has been extensively preserved. The dining room and the lobby still appear as they did 100 years ago. Certainly we had to make changes over the years, but the character of the Sanatorium has been authentically preserved. The romance and atmosphere of Thomas Mann’s great novel, The Magic Mountain, is still alive in the Schatzalp. As soon as the heavy iron gates are closed, you can feel yourself transported back to a time where there was still time, and you will always be able to follow the tracks of the young Castorp or the graceful Madame Chauchat. 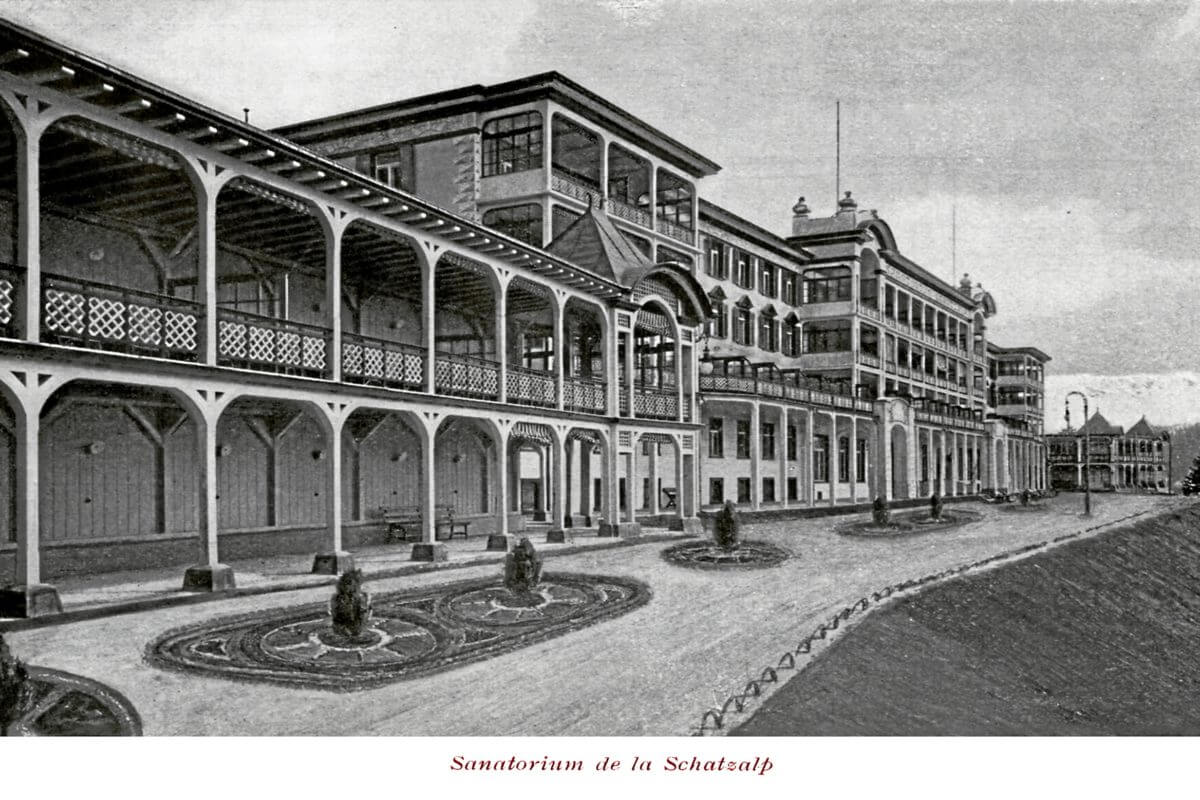