Warning: Use of undefined constant WPSEO_Frontend - assumed 'WPSEO_Frontend' (this will throw an Error in a future version of PHP) in /home/strelapa/public_html/schatzalp.ch/wp-content/plugins/ceceppa-multilingua/includes/compatibility.php on line 324

Imperial Russia in the Alps

Schatzalp was founded in 1900 as a luxury sanatorium, situated on a sunny mountainside 300 meters above Davos. It offered the most advanced medical treatment available at that time, in a building specially designed to provide patients with the highest level of comfort and hygiene, as well as peaceful, beautiful, and stylish surroundings. Schatzalp was particularly popular with British and Portuguese guests, and was always a truly international establishment. It was not unusual to have guests from twenty different countries at any given time, representing not just Europe but Asia, Africa, South America, and the Middle East. An emir from Egypt might sit down in the dining room beside a baroness from Belgium, an artist from Germany, a businessman from Brazil, or a prince from India — the same scenario described by Thomas Mann in the Magic Mountain, but arguably more interesting, since truth is almost always “stranger than fiction”!

Three rooms (today emporer rooms, 101; 201; 301) were held on permanent reserve by Emperor William II in the event that one of his family members might develop tuberculosis, and though none of the Hohenzollern princes or princesses ever ended up needing to come to Schatzalp, there was nonetheless one very prominent royal guest: Grand Duke Dmitri Pavlovich (Romanov) of the Russian Imperial House.

Imperial Russia in the Alps

Grand Duke Dmitri Pavlovich (Romanov) was born on a country estate near Moscow in 1891, and destined to lead an extraordinary life. His mother died giving birth to him, and his stable home life ended in 1902 when his father married a divorcée and was banished from Russia, leaving Dmitri and his sister in the custody of a notoriously strict uncle. Though the children felt uncomfortable and unhappy in their new home, they were nonetheless devastated when their uncle died in a violent terrorist attack in February 1905. But the loss ended up having a silver lining for Dmitri, who was then embraced as a surrogate son by his “Uncle Nicky” — Emperor Nicholas II of Russia.

As a young man, Dmitri graduated from the Nicholas Cavalry School in St Petersburg and began service in the Horse Guards regiment. In 1912 he competed in the Olympic Games in Stockholm as part of the Russian equestrian team, and was reportedly engaged to the Tsar’s oldest daughter (Olga), though the engagement was never publicly announced and seems to have been short-lived — reputedly because of Dmitri’s wild lifestyle in St Petersburg and Moscow, where he could often be seen in the company of various demimondaines at the hottest nightspots.

Likewise, in pre-WW1 Paris, he moved in artistic circles and was at home among the most glamorous young socialites. When war broke out, he fought with the Russian Army in East Prussia and was decorated for rescuing a fallen comrade under heavy artillery fire, but after being transferred to Headquarters he resumed his ‘fast’ lifestyle during leaves of absence in St Petersburg and Moscow. Meanwhile, his relationship with the Empress became strained as he voiced his objections to her close association with the scandalous Siberian faith-healer Grigory Rasputin. As Rasputin extended his influence to the political realm, Dmitri became convinced that Russia’s survival depended upon the bogus ‘holy’ man’s removal, and joined a conspiracy to assassinate him. Rasputin, for his part, reportedly predicted that if a Romanov lifted a hand against him, the Tsar and his whole family would be wiped out.

On the night of 16-17 December 1916, Dmitri and his co-conspirators lured Rasputin to a private home and attempted to poison him with cyanide-laced wine and cakes. When that failed, they resorted to firearms, firing several shots and at one point chasing their difficult-to-kill victim out into a snowy courtyard. Rasputin’s body was then driven to a bridge over the Neva River and dropped into a previously located hole in the ice, but the conspirators forgot to weigh it down, and it washed up a few days later. News of the bizarre assassination circled the globe, and over the years has acquired legendary status, becoming the subject of countless books and movies. Dmitri was placed under house arrest and then quickly sent off to a Russian military encampment in remote Qazvin, Persia (present day Iran), lest he follow through with an attempt to overthrow the Tsar. He himself claimed that just such a coup d’etat was considered, but that he couldn’t bring himself to go through with it in the end. He was quite possibly the last political exile from Imperial Russia, and his banishment probably saved his life when revolution broke out only a short time later.

After living more than a year in Tehran under the protection of the British Minister and his wife, Dmitri finally received permission to enter the UK, arriving in London in December 1918 after the British Minister (Sir Charles Marling) convinced the Foreign Office that he was the prime candidate to become Tsar in a revived Russian monarchy. He found the British Royal Family to be sympathetic toward him but uncomfortable with his presence in the UK at a time when revolution was a real threat all over Europe and the public took a hostile view of the Romanovs. But he refused to leave the country voluntarily and was never actually ‘kicked-out’.

Dmitri spent his first months in the UK living at the London Ritz, studying political economy with a professor at the London School of Economics, and engaging in affairs with women as diverse as the scandalous Argentine actress Teddie Gerard and Consuelo Vanderbilt, the Duchess of Marlborough. Unable to afford an automobile, he bought a motorcycle instead, and adopted a feisty Chow Chow to keep him company at the hotel.

In 1920, Dmitri moved to Paris with his sister and brother-in-law, where he struck up a year-long romance with Coco Chanel. At first the two of them tried to keep their relationship secret, traveling incognito to Monte Carlo during the off-season. Dmitri still believed that he might someday become Tsar, and he also hated the thought of being seen as a ‘kept man’, but soon all of Paris knew about the love affair between the exiled Grand Duke and the glamorous couturier. Dmitri’s creative influence on Chanel during this time is well-known, especially with respect to the famous Chanel No. 5 perfume, but this happy period of his life did not last long. His aspiration to be the pretender to the throne was quickly rebuffed by the Russian émigré community in France, and, after his break up with Chanel, money troubles — aggravated by compulsive gambling — forced him to try his hand briefly as a champagne salesman.

Just as his situation was becoming desperate, he met a young American heiress, Miss Audrey Emery, in Paris, and the marriage that soon followed brought tangible benefit to both partners — Audrey received a much-coveted title (Princess Romanovskaya-Ilyinskaya), and Dmitri was freed from financial difficulties. With his wife standing firmly behind him, he returned to his passion for politics, playing an increasingly important role in an émigré organization called the Young Russia Party, with the express aim of creating a “socialist monarchy” in Russia! He gave speeches all across France, urging his fellow émigrés to take pride in Russian accomplishments even under the Soviet regime. But once again his happiness was short-lived. The practical benefits of his marriage notwithstanding, he had genuinely longed for a warm, stable family life, and was crushed when the relationship began falling apart in 1935. By 1939 he was a divorced man living alone at the Georges V hotel in Paris, disillusioned by the Young Russia Party and its charismatic leader, Alexander Kazem Bek, who was rumored to be a Soviet agent. His health was rapidly deteriorating, his “stateless” status made his position in France precarious, and, to his horror, the young pretender to the Russian throne was being actively courted by the Nazis.

In a January 1939 press interview, Dmitri decried any Romanov family involvement with National Socialism, then retreated into private life. While Europe teetered on the brink of war, he discovered that his own life hung by a thread, and made a mad dash for Davos on one of the last trains to leave Paris before the conflagration broke out. At the Hotel Angleterre in Davos Dorf he was told that all the sanatoriums were closing, and made a panicked call to Schatzalp, seeking reassurance that he would be received as a patient there. Upon his arrival at the sanatorium the next day, the first thing he did was to drop to his knees on the floor of his room and thank God for bringing him safely there!

By then His disease was so far advanced that even Schatzalp’s chief surgeon, the world-renowned Dr Gustav Maurer, despaired of saving him, but, against all expectations, he survived and even began to thrive, gaining so much weight that he had to buy a whole new wardrobe in Davos. He received permission to set up a model railroad in one of the cellar rooms at Schatzalp, and became a frequent guest at Schneider’s café, where those who opposed the Nazis tended to congregate. A romance developed between him and a fellow Schatzalp resident, a young woman from Palermo, and he also enjoyed warm relations with Dr Maurer and his elegant Belgian wife, happily accepting dinner invitations to the Villa Guarda. He saw Walt Disney’s “Snow White” at a Schatzalp screening and marveled at it, spent countless hours listening to radio reports about the war, and filled page after page of diary entries which, together with his letters to his sister and a private secretary in Paris, provide an invaluable first-hand account of life at Schatzalp during one of the strangest periods of its existence.

A real life (albeit involuntary) Castorp, Grand Duke Dmitri of Russia, erstwhile Olympian, political assassin, would-be Tsar, and celebrated lover, lived for nearly two and a half years at Sanatorium Schatzalp in what is now room 309, a modest but much-appreciated “Großfürstzimmer” for a man who, from childhood on, had learned to seek happiness wherever he could find it and never take anything for granted.

Dmitri died suddenly on 5 March 1942, reportedly after having received his discharge from Dr Maurer and hosting a Russian-themed party to celebrate his imminent departure. Two rumors persist from his stay at Schatzalp — the first claims that his nurse, a woman with prodigious facial hair, was actually a male bodyguard in disguise, and the second that his sudden death was actually the result of murder! His correspondence with his sister confirms the existence of the mustachioed (female) nurse, but no evidence of (or motive for) murder has ever been produced, and his death was almost certainly from natural causes — the final act to an extraordinary life. 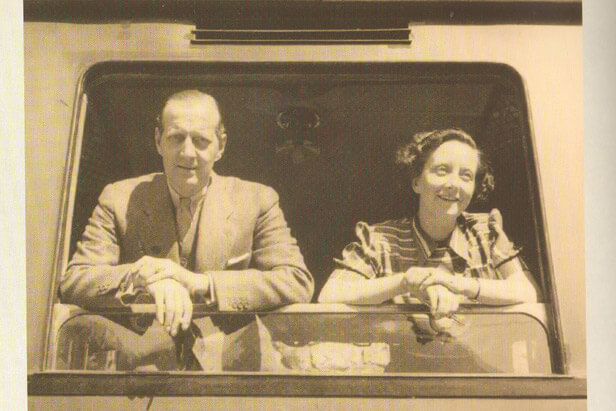 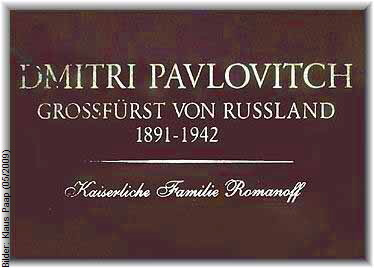 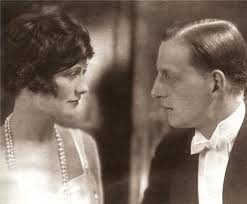